I want to begin by apologizing for not continuing the publication of the following chapters of “PEPE’S HENS”. However, since not everything in life is perfect, as my mother says, the previous four weeks have been of constant learning and rediscovery of new stories in my life. Through facing a series of inconveniences that completely distanced me from what I like to do most, “Write for you”.

Very soon I will tell you about everything I experienced during those four weeks and today I want to share a little about an unexpected trip I made to my hometown JUTIAPA, and at the end I will leave you a link where you can read the first chapter again of “PEPE’S HENS”, since I will be publishing the following chapters soon .

It had been about fifteen years since I visited Jutiapa and although almost everything has changed and sometimes, I even got lost in its streets it still felt like home. Jutiapa is a department in Guatemala that borders El Salvador and the Pacific Ocean. The departmental head is called Jutiapa and in 2018 according to data taken from the internet, it had an approximate population of 488,395 people. The department is divided into seventeen cities and has an undeniable wealth of tourist attractions.

The first day I woke up in my town, I had the privilege of being able to listen to the crowing of the roosters, which freely run through the courtyard of neighboring houses. As well as feeling the fresh water that comes directly from the spring while bathing. Also to be able to walk barefoot on the land I was born, allowing me to reconnect with my origins and to be able to feel the warmth of my neighbors who hurriedly greeted me when buying something at my sister’s store (Verenice’s store). However, due to the current quarantine situation, my neighbors could not stay to talk for a long time.

For me, returning to my land was like renewing the energy of my body and awakening new ideas in my mind, especially when participating in the most beautiful spectacle that my eyes have been able to contemplate at dusk. I lived something again that did not manifest itself in my heart for a long time which is one of the most tender and enduring feelings that through time, I have been able to preserve. Feelings that increased when

observing the streets of my town slowly changing color. The light of the day became dim because an orange color filled all space with heat, to later turn into red and yellow tones that painted the streets with passion. Giving the impression that everything around me was engulfed in flames, while the sun fell asleep and slowly hid gently moving away into my beloved Jutiapa, “The cradle of the sun.” 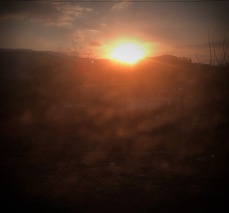