I have been asked several times, If what I write, are real stories or fiction? And in response to the question “I just smiled.” Then I let them define whether it is a yes or a no, if they want to believe what they are reading so immediately I ask: What do you feel as you read? Is it a real emotion or a product of your imagination? By reacting this way, I do not intend to be rude or pretentious about my stories, the truth is that if I give a concrete answer, “They would not believe it is possible to see how reality can become fantasy and they would doubt how fantasy can exceed the limits allowed by the truth, to become real facts through my lifetime”.

But they have written to me and also have asked me in many occasions, what you write are real or fictional stories? That without going deeper into words I will answer the question and here is the answer: “What I write is based entirely on the stories of my life, full of illusion and fantasy, where wanting to find and separate reality is like wanting to trap my spirit that is free.”

And to please some friends, I will tell you the story of “PEPE’S HENS”, like a Halloween story, I hope you like it and stay with me until the last chapter since at the end, you are the ones who decide if it is reality or fantasy .

How difficult life can be through the eyes of a child who lives tormented by the night ghosts, who freely walk and talk around telling him horror stories that they dramatize in front of his terrified heart. I don’t remember exactly the year, but it was around 1979, in the month of May when we first arrived at a picturesque town, called Rio Bravo, in the providence of Suchitepéquez, Guatemala.

I remember perfectly the train track running down the middle of the main street dividing both ways. The streets were not paved and they looked extremely damaged with holes everywhere, 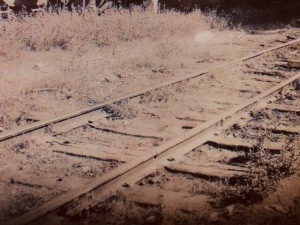 the bus we were traveling in jumped around just like beans on a hot pan, the roads were covered with dirt, or rather a reddish or yellow dust and every time a car ran over them, enormous dust clouds rose through the air and looked like a dense multicolored mist as they were pierced by the sun’s rays. The suffocating hot weather made it difficult to breathe, at times it seemed that I was drowning in heat and dust. Most of the houses were built out of wood but were very deteriorated on the exterior. There were times when in my child’s mind I visualized the landscape around me as if it were a ghost town taken from one of the books that my mother allowed me to read. Amid the shrill noise produced by the engine and the squeak of the bus walls vibrating with every blow due to the holes on the road. However, my

ears heard a distinctive sound that I could not define but it traveled in the wind as if It was transmitted by a loudspeaker. I felt as if  my head was about to explode, but my curiosity to make out the sound I heard motivated me to close my eyes and forget for a moment the oppressive pain I felt in my stomach and the foul burning in my throat due to constant feeling of nausea and vomiting because of the bus ride. I knew that my condition was depressing and that I could not ask for anything since my sister was very angry with me because I could not control the vomiting and my condition was embarrassing for her.  So, bending my legs in such a way that my knees pressed my stomach, I tilted my head and sharpened my ears. Then in the midst of so much pain and confusion I could clearly hear in the distance the tumultuous roar of running water, which undeniably indicated that the river was near.

Since I can remember, even as a very young child, when I hear sounds that I cannot define, instinctively I close my eyes and automatically I begin to visualize the objects that produce those sounds. And as I kept my eyes closed, my mind drew a majestic river to the extent that I could perceive its smell and feel the humidity produced by the river in the environment. Arming myself with courage, I opened my eyes and ignoring the angry gestures on my sister’s face I asked her, “Is there a river in this town?”

She looked at  me and authoritatively  replied, “Yes, but you are forbidden from approaching the river” My sister kept talking, but I was no longer listening to her because my mind began to plan the many ways of how I could approach that river, while I imagined myself bathing in its waters.