Perhaps it seems contradictory to only speak of how time can pass slowly for people who suffer from a disease; or time that can pass as fast as a shooting star, for those who are immersed in their own world, enjoying a happy life, without perceiving the pain of others that can often be mitigated with a SMILE.

Lark’s crying days were coming to an end, after almost four weeks of receiving cures on her feet every afternoon. The girl’s melodious voice mixed with her cries of pain, had reached deep into Hilda’s heart every time she sang.

“You have a wonderful voice and with the beauty of your face, you can become a famous singer” Hilda said while caressing her cheeks.

“I participate in the school choir, because I like to sing.” Lark answered, opening her eyes dreamily, which in that instant, began to shine again. A slight smile spread across her mouth, while her cheeks flushed showing the strength of her youth. 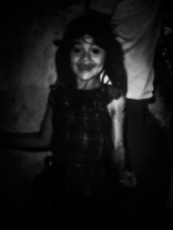 “Little Lark! You’ve smiled again,” Hilda exclaimed with glee. “Your father will be very happy when he sees that the paleness of your face is disappearing. Let us comb your hair and make you some beautiful braids with colored ribbons.”

Lark spreading her arms, holding Hilda tightly. Then she moved closer to her chest and hugged her tenderly. Hilda reciprocated that hug, while the little girl’s heart began to beat rapidly. Lark, closing her eyes, allowed herself to be enveloped by the maternal warmth that emanated from Hilda’s body; as she had gotten used to the kindness of the woman, who without knowing her was offering her protection. Then in a gesture of gratitude, Lark opened her eyes and kissed Hilda on the forehead because she felt like she was already loving her.

At that moment Maria entered the room. Hilda picked her up and put her on the bed, “Lark, I’ll do your hair while you comb your little sister’s. ” Hilda said, just when Manuel arrived with Manuelito in his arms. Watching the family share together, enjoying what they were doing, it seemed that the traumatic experience lived was beginning to remain in the past…

The earth is not a planet that is embedded in our solar system, IT IS OUR HOUSE, which rotates on its own axis day by day, without stopping. Time passes and each living being continues its life process; trying to comply with the established parameters of its creation, even despite human instincts that can become uncontrollable.

Pain does not purify the soul, because all human beings are born with a pure soul. The experiences we live have different degrees of pain for each person individually. And it is that degree of pain that can destroy the very essence of a human being who has been subjected to traumatic experiences, which when suffering, seem impossible to overcome due to the paths we choose to follow.

But we are all alike. We have the ability to assimilate, react, and overcome pain even at times when it is difficult to see the differences between good and bad. Every person at a specific moment in life, after having experienced a degree of pain, must learn to choose from these two: “If you want to be carried away by irrational instincts that can turn you into a wild animal” or “If you want to learn to value your life more , leave the past behind, forgive and learn to be happy. “

When Lark returned to school, no one wanted to be near her. All the children went out of her way when they saw her arrive. Upon entering the classroom, all the children who were there stood up and ran to a corner where they huddled waiting for the teacher to arrive.

When the teacher arrived, she asked them, “What’s wrong with all of you? Why are you crowded in that corner of the room? ” No one answered her, they all stared at where Lark was. The teacher turned her head and when she saw that Lark was there, she stood in front of the group of children, extended her arms to the sides as if trying to protect the students, “Lark, grab a desk and place it at the end of the room. Your place will be there from today. “

Lark, without understanding everyone’s attitude, felt rejection of each one of them, all of whom looked at her with contempt. Feeling that her whole body was shaking with a cold current, she wanted to run back to her house, but made the decision to obey the teacher.

Sitting at her desk at the end of the room, Lark remained still without participating in any class activities, feeling ignored even by her teacher. When it was recess time and she walked to the schoolyard, Lark felt that she was walking in a different world to which she did not belong. Lulled by her own thoughts and a sadness that filled her heart, Lark did not notice that a child was running towards her. Until she was abruptly pushed to the ground. Then the blow she received when she hit the ground, unleashed her feelings, and she began to cry. The boy who pushed her stood in front of her laughing at the situation.

Lark’s emotions of sadness and frustration turned into anger. Getting to her feet, she ran into the classroom. She searched her backpack for the needle and thread that Hilda had bought her to teach her to embroider blankets. Lark put the thread on the needle and then she put it inside her skirt’s pocket.

When classes dismissed, Lark hurried out of the school. Pushing through all the children she found in her way, not stopping until she found the boy who had pushed her and began to follow him very closely. When they were far from the school, Lark began to run until she caught up with the boy. Then wielding both hands she hit him on the back to knock him down. Then with a cold gaze, radiating anger, she put her left foot on one of the boy’s legs,

pressing it with her shoe. She took the needle out of her skirt’s pocket, extending the thread that held it, and began making circular movements with her right hand to turn the needle rapidly. With an authoritative tone she shouted, “Are you afraid of the Sombrerón?”

he boy’s face paled, his eyes widening as he watched Lark’s arm flutter in the air, bringing the needle closer to his face. In an instinctive movement the boy closed his eyes and covered his face with his hands, while his heart was agitated as he heard the voice of Lark that shouted again, “Today you will learn to feel fear of me, too!”