The wind was blowing very hard, knocking over objects, making many hats fall off people’s heads and roll as they hit the ground, revealing the ruffled hairs of their owners. Men in jeans walked proudly showing off their best pair of well-polished boots. Women wore well-applied make up, perfume, and their best dresses in bright colors which outlined their figures when walking. The atmosphere was full of laughter, flirtation, puppy-love, and the disposition to enjoy the fair. Nobody cared that the tin roof sheets resounded with a crash every time they were tossed by the wind. Suddenly, the rain fell cruelly on the entire town of Jutiapa and the people who were in the field of the fair ran in different directions, trying to find a place to protect themselves from the rain so as not to get wet.

In an instant, the rain eliminated all joy in the environment, turning the streets into rivers of water and garbage that meandered between the sales stands. The dance halls and food stalls were filled with soaked people dripping water as they walked.

Sitting on the couch, with the living room door open, Lark watched the rain fall. The fair committee decided to delay the opening until dark due to the rain. Lark was nervous, that night would be the first time she would sing in Jutiapa and while she watched the rain, she thought that she had to be strong so as not to feel hurt if someone offended her while she sang.

Hilda already picked out the dress Lark would be wearing for that night. Manuel would always be by her side to take care of her. Thinking about how important that night would be in her life, Lark gradually fell asleep. “Lark!” Hilda yelled. “You fell asleep. Hurry, we have little time to get ready before your father comes looking for us. “

Night came and Manuel waited outside the house with the truck running. When Lark left the house Manuel thought, “How beautiful my daughter is.” Lark had taken special attention to her personal grooming in such a way that she had been transformed into a dazzling beauty, emanating a pleasant smell of roses wherever she walked.

Hilda was worried, “Lark is very beautiful and I am afraid that some drunk man at the fair will disrespect her.”

“Don’t worry, I’ll be taking care of her all the time,” replied Manuel.

When they reached the fairgrounds, the parade was over. The local authorities had already made their speeches and a folkloric group of dancers were on stage. Lark’s arrival disturbed everyone present. Many were there out of curiosity. Others withdrew when they saw her arrive. But Lark, without caring about the murmurs her presence unleashed from the people, she walked upright and defiantly up to the stage.

The host of the event introduced her, “With you a Jutiapaneca pride, a woman who is raising the name of our town throughout Guatemala, with an exceptionally prodigious voice and talent that highlights her beauty, let us welcome THE LARK OF THE EAST.”

Lark walked to the center of the stage amid many whoops, shouts, and applause. She couldn’t believe there were people welcoming her with such joy. Lark took the microphone and began to sing. Her wonderful voice contrasted the sound of the wind, which, ashamed of making so much noise, began to diminish its’ strength to gently spread the scent of roses that emanated from Lark’s body. The colored reflectors illuminated Lark’s figure with intensity, following her every move she made. The sound of her voice excited the senses of those present, filling them with the perfect interpretation of her. The audience shouted, clapped, and sang along with Lark who shone like a star.

Lark sang two songs, then paused and walked to the edge of the stage to greet her audience. At that moment, her eyes met the burning gaze of Saul who was watching her passionately. Lark felt Saul’s eyes penetrate her own intensely, causing her heart to start beating fast. For a moment Lark felt that everything around her disappeared and in three seconds she watched Saul from head to toe, and unable to avoid it, she let a slow sigh flow from her chest. And she felt herself blush when Saul opened her mouth and with sure movements said, “You are a beauty that has stolen my heart.” Lark felt an electric current circulate through her veins, took two steps back and regained control of her body.

Lark continued singing, her voice was in tune with the music, but her brain and her heart could not stop thinking and feeling for the first-time what love is and inevitably she let herself be enveloped by that feeling every time she saw Saul smiling at her.

Lark’s presentation was a success, they had no mishap and Lark was happy. When she came down from the stage, her father helped her, holding her arm.  Then they went to the truck where Hilda was waiting for them to return home.

Saul had followed them without their noticing. When he saw that Lark was leaving with her parents, he began to walk between the sales stalls and when he left the field of the fair, where he entered a dark alley without electric lighting. Saul was not afraid because it was not the first time that he walked there to get to his house faster.

In the distance Saul could see the light that illuminated the street at the other end of the alley. Without any hurry he kept walking and when he almost reached the light pole that illuminated the street, he heard a voice that spoke behind him, “I can feel when love is near. You like Lark and she likes you. But Lark will never be for you, unless you do what I tell you. “ 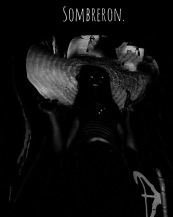 “I want to be your friend,” answered the voice from the shadows, “I can give you Lark. I can give you a lot of money. All you must do is say YES and make a deal with me. ” Said the voice as a small, dark shadow began to circle around Saul.

“If you love Lark, you must deal with me. If you love Lark, answer YES and do everything I tell you. Answer YES, answer YES!”, the shadow shouted making circles while running. Saul felt like he was gasping for air and was running out of breath, when images of what his life could be like spending a lot of money, drinking alcohol, and enjoying the company of various women appeared in front of his eyes. Feeling the blood boil in his veins, Saul yelled, “Yes!”