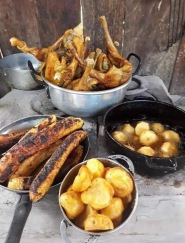 “What? I dare you to do it; I know you are fearful, so you do not want to be in the dark, do you? Asked my sister.

“What happens is that candlelight moves and makes me feel dizzy and I want to vomit,” I replied.

Then my sister sat up  on the bed a little and with an angry expression said to me, “If you stay in the dark you are going to cry, I know that you are afraid of the dark, but if you are going to vomit, you must leave the room and stay out there for a while, but don’t make any noise when you come back to bed again because we’re all going to be asleep. “ 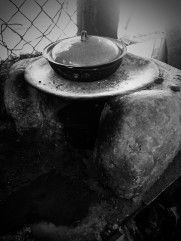 That was just what I wanted to hear. My sister knew that I was afraid of the dark and that’s why nothing would happen if I left the room for a little while, because according to her I would run back full of fear to see myself completely alone, outside the room in the middle of the night. After my sister gave me permission to leave the room, she went back to bed and I quickly put on my shoes, walked to the door, opened it a little, and went back to where the candle was lit. Then blew out the candle. Then I left the room as quickly as I could without a sound and ran to the backyard.

With the flashlight in my left hand, I felt powerful and unafraid of the dark. So, I hid behind the trees and waited patiently for Pepe to come looking for Mrs. Lola. While I was hiding in the dark, I noticed that the kitchen door opened and Pepe came out carrying a sack (Big cloth bag).

The sack looked heavy and from what I observed there was something alive inside, because it was moving. On this occasion Pepe did not walk into the darkness, but instead walked towards the patio door where he said goodbye to Mrs. Lola, “Tomorrow I will return with the fat chickens as you like them, I am leaving because today’s orders are heavy.”

Then Pepe left and Mrs. Lola closed the door, placed a big lock inside, and then went to her room. I was upset because how would I get out of the house? Besides, if too much time went by, I would no longer be able to follow Pepe. Then I remembered the hole on the wall in the back of the patio, so I walked over to that wall and escaped through the hole. Then I ran to the corner of the house. When I reached an electric power pole, I stopped to observe the street where Pepe had exited through the backyard gate, but there was no one there; the street was lonely, no one was there. But a disgusting dead animal smell that began to irritate my nose due to how strong it was perceived, served as a guide to follow Pepe’s trail. 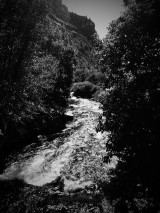 I started walking following the smell of the dead animal, when suddenly a blackout occurred. Surprisingly, the street was totally dark, and it was then when I realized the total silence that reigned in the atmosphere, when suddenly I clearly heard the noise of the river roaring water. The hiss of the owls that inhabited the treetops and a bloodcurdling scream that traveled in the wind. 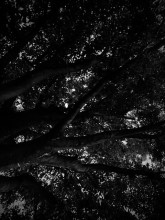 For a moment, my legs trembled, and I remembered what Mrs. Lola had said about “La Llorona”, when she told me that La Llorona was living near the river. I also remembered that it was said that when you heard the cry of La Llorona far away it meant that she was near. At that moment I had doubts about following Pepe and I backed away towards the hole in the wall to go back inside the house; but when I got there my breathing became rough and my movements awkward.

I was stunned to notice that there was no hole in the wall everything was perfectly sealed as if there had never been a hole. I continued with the flashlight in my left hand shining in all directions, I felt my pulse accelerate and I was short of breath, it seemed to me that everything spinning around me. I was having a panic or anxiety attack because the owls kept whistling and the cries from La Llorona were more and more distant, which meant that she was closer to me.

The noise of the roaring water splashing against the stones in the river also hurt my ears and suddenly the lights came on. I was facing the wall and had my right hand on it, as if trying to find some mechanism that would reopen the hole in the wall. But I did not find anything then that stinky smell of dead animal invaded all around me and my skin became bristly when I saw a shadow reflected on the wall. I slowly turned around and there was Pepe standing in front of me with his horrible personality. He had his arms up, holding a white sack that he quickly dropped on me, causing me to feel suffocated as I slowly lost consciousness and I passed out …