In the middle of the party, Fred stopped the music and shouted, “It’s time to open the presents. But this time I will not be the first one to give out the gifts I bought. Because we have a mysterious businessman who anonymously sent us many gifts, coincidentally with the number of people in our house. But let me tell you that my heart knows that the mysterious man is called Ebenezer! Uncle Ebenezer, I give you the honor of being the first one to deliver the gifts. And I must add that we have no gift to give you this Christmas because we did not know that you would be here with us, but tomorrow I will personally take your Christmas gift to your office.”

END_OF_DOCUMENT_TOKEN_TO_BE_REPLACED

About an hour had passed since Ebenezer returned home and went to bed, so his body regained the physical strength he needed to continue enjoying Christmas Day. When he woke up, his spirit was overflowing with youth, and his eyes had the brightness of happiness and satisfaction produced by being honest and generous with other people. Standing in front of the mirror, Ebenezer spoke; joy expressed in his words. “I feel like a youngster, with all the desire to live my life and enjoy everything around me, but with wisdom. I must take care of my health, if I want to live many more years. Because the mirror reminds me that although my spirit became strong, vigorous and young, my body has deteriorated over time. But that will not be an impediment for my attitude to always be positive and cheerful.”

END_OF_DOCUMENT_TOKEN_TO_BE_REPLACED

Ebenezer walked slowly. He didn’t know what time it was. Although he could discern that it was already past noon, he did not think about how much time He had used on Christmas Day because He did not want to feel limited or restricted by time, He wanted to enjoy that day December 25 to the fullest. He had already been a slave to time and work for many years. Ebenezer wisely repeated to himself that the coming years would be different because he would live them with joy in his heart and although he did not know how many more years he had left of life, he knew that in the years to come, he would live them fully, without selfishness, without resentment , without bitterness in the soul and without worrying too much about the future since the spirits had taught him that the future does not belong to us and is uncertain.

END_OF_DOCUMENT_TOKEN_TO_BE_REPLACED 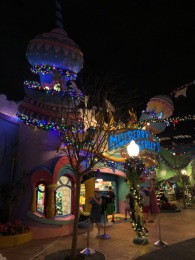 Ebenezer was walking towards the park where the Spirit of Christmas present had shown him that Belle was playing with her children. And as he walked his feet sank in the snow and his mind took him to the past where, as a young boy, he used to have fun playing with his sister in the snow. Ebenezer walked with his head down, letting his memories fill his spirit with the love he felt for Fan, his younger sister, who was still alive in his heart even after her death. With his eyes on the snow he watched the faint rays of the sun reflect two shadows walking together, Ebenezer raised his head and looked everywhere, but there was no one at his side. However, sunlight still reflected two shadows on the snow. Then Ebenezer heard someone’s laugh again, much like a child’s laugh. Bewildered, but determined he asked authoritatively, “Who is walking next to me? And why can’t I see you?”

END_OF_DOCUMENT_TOKEN_TO_BE_REPLACED

While walking Ebenezer, kept the images of the man and his family under the bridge in his head, just as the spirit of Christmas Present had shown him the night before. When he reached the bridge, he could recognize it immediately; without hesitation, he began to descend the steep path in search of that man. As Ebenezer was under the bridge, he encountered terrible sights that could easily reach the heart of any sensitive person to human pain and thought,

END_OF_DOCUMENT_TOKEN_TO_BE_REPLACED

Ebenezer made a mental list of the visits he would make and while walking down the street, he met three men who a few days earlier had asked for a donation for the shelters of the town that protected the homeless, the elderly and orphans throughout the year. The three men, facing Ebenezer, ignored him and continued walking. Then Ebenezer turned around, raising his right hand, shouted at them, “Gentlemen, I would like to talk with you for a moment.” The three men stopped and looking into each other’s eyes, nodding their heads as to say okay.

END_OF_DOCUMENT_TOKEN_TO_BE_REPLACED

The first time I watched the movie “A Christmas Carol”, I was a child of approximately 8 years old and I was captivated by the movie from the beginning to the end, but it left me with the feeling that the movie was incomplete because to my way of thinking that the movie ended abruptly, simply with a brief explanation of what happened on Christmas Day and the following years after Ebenezer changed his ways. From then until today, I have waited patiently for a second part of the film and after all these years I have grown tired of waiting for another part of the famous book that had yet to be written, so I have decided to make my own version of the ending to “A Christmas Carol” and I have titled it:

END_OF_DOCUMENT_TOKEN_TO_BE_REPLACED

Since I was a child, I’ve liked cooking and modifying cooking recipes to give them a very personal touch and somehow, I always convert the recipes into original combinations of ingredients and flavors creating my own particular style of preparing them. On this occasion I want to share with you a recipe, which I’ve given the name of “Maria Amelia”, as a tribute to a great woman. She was an example in many aspects of life and she touched the lives of many people. I’ve used this recipe every Christmas season to prepare “María Amelia Cake”, and whenever I do, I remember how Maria Amelia ate almost the entire cake and with a jovial smile she told me, “You are to blame for making it so good, it’s perfect!, and then she asked ; “Could I take a little piece for Papa?, that as usual he had decided to stay at home”. So, every time I baked, I would make a special cake just for her and since it has been a few days since her passing I want to say that her joy and sweetness will become infused in the flavor of this cake. Even though this Christmas season will be the first of many in which Maria Amelia will not be eating the cake.

END_OF_DOCUMENT_TOKEN_TO_BE_REPLACED

In this special time, it is good to know a bit of history to get to know the true meaning of Christmas.

Christmas is a celebration that, according to historians, has its origin from many pagan festivals, which were celebrated to honor mythological gods or commemorate cruel or bloody acts. In addition, history assures that formerly in the temples erected for the adoration to God, existed much ecclesiastical debauchery. That has nothing to do with the birth of Jesus Christ; According to several scientists who studied earthly events and biblical stories, they have determined that the birth of Jesus Christ occurred between the months of April or May. And that Christmas was a holiday instituted by the Roman church, which chose December 25 to commemorate the birth of Jesus Christ. This way, all believers moved away from pagan festivals to celebrate a transcendental event such as the BIRTH OF JESUS CHRIST, uniting them in a single celebration called CHRISTMAS.