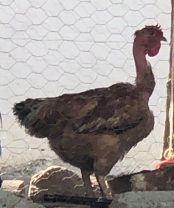 The atmosphere was humid and cold. I felt pain all over my body as if I had performed a complete workout routine. I wanted to open my eyes, but I was so tired that I could not do it. However, I was slowly waking up, but I still felt very sleepy. My heart was racing, and a strange feeling came over me and warned me of the danger around me. At that moment it seemed to me that I had a horrible nightmare, my body felt extremely heavy, and I could not move freely. 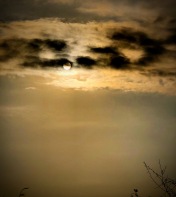 With great effort I moved my right arm looking for my blanket to lessen the cold I felt. But my hand could not find my blanket, I could only feel the brick floor, I recognized it because the bricks were not evenly placed; I could feel the shape of the bricks by touching the surface with my fingertips. Some bricks were protruding from the ground. When I was able to fully open my eyes and my brain started to react, I noticed that a dim light illuminated the entire interior of the room where I was. Then I understood that it had not been a nightmare, “The room where I was in, did not belong to Mrs. Lola’s house.” The reality of my situation abruptly came to me when I met my gaze with a window.

The room in Mrs. Lola’s house had no windows. I was still having trouble breathing and I remembered that Pepe had put me in a sack and then I did not know anything else. Then little by little I got up.  I was not tied, but I was trapped in a rustic room made of bricks that were not evenly placed, since every two bricks there was one that protruded from the wall as following a set pattern. I instinctively looked for my flashlamp, but I did not have it anymore. Then I looked in the pockets of my pants and discovered that Pepe had not taken away the candle, the matches, or the corn kernels.

The window was not very high, and I could use the protruding bricks on the wall as a ladder I could try to escape through that window. At that moment my stomach started making noises, I was feeling hungry; maybe it was because in the room there was an exquisite smell of freshly baked bread like the bread Mrs. Lola placed on her table and that I really liked to eat. At that time I was just a child and I was not very brave, so I do not try to justify my reaction, but I was hungry, I was cold, I was alone as a result of my disobedience when leaving the house, I began to experience feelings of  despair because I did not know how long It had been and I didn’t know if my sister had already returned home and abandoned me, because I was not at Mrs. Lola’s house so I could not go with her. 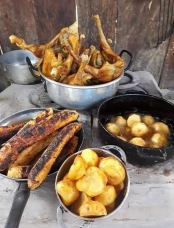 Yes, I was just a child, so it is not bad for me to tell you that I started crying. The smell of freshly baked bread began to mix with the smell of hot chocolate and my stomach began to ask for food with more intensity. My mother had taught me if someday for any reason I was ever hungry walking close to a restaurant, a dining room, or someone selling food, and if I had no money to buy, take a deep breath of the smell that came from the food and then take a bite of a piece of bread or chew gum imagining that I was eating the best feast I could have. That way I would stop feeling hungry because it would trick my brain.

But I did not have a piece of bread at that moment, not even a chewing gum, but I had the corn kernels that I had kept in my pants pockets, so I grabbed three corn kernels and taking a deep breath of that pleasant smell of freshly baked bread I began to chew corn kernels. As I chewed the corn, my body filled with energy, I regained my enthusiasm for escaping, and I felt strong, brave, and skilled enough to climb the wall using the bricks as a ladder. Without much effort I reached the window because it was not very far from the ground. 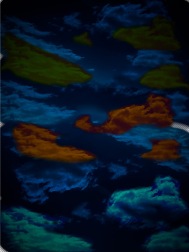 When I put my head out the window, I found a beautiful landscape, the moonlight illuminated everything, the leaves of the trees gleamed covered by small drops of rain, there was a pleasant smell of  morning dew on the ground, there were many flowers that formed a multicolored garden scented with the essence of roses. In the background the river was rushing, breathtakingly large and wild hitting the rocks that stood in its way, splashing all around it and providing water to the fruit trees that were on the shore. Looking up, I saw the clouds floating like large balls of cotton candy, some white, others light blue, green, or yellow. It seemed to me that if I went a little higher, I could touch them with my hands. 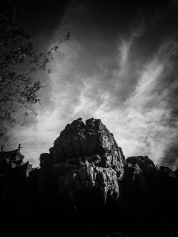 The place where I was, looked like a castle painted all black on the outside with the peculiarity that many bricks protruded from its walls. It was as if someone in their construction of it had wanted to make sure they could walk on its walls, because on the left side of the window the bricks formed a path up and down the castle. I was happy and I was sure that I could fly, I felt that my whole body became light weight so if I threw myself out, I could float on the wind. So out of conviction rather than faith, I left the room where I was through the window, but I did not try to fly but started walking on the bricks up the castle. The colored clouds were very dense and when I walked through them, they moistened my body, as if a soft breeze hugged me inside. 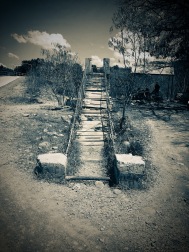 Then I walked until I reached the roof of the castle where there was a terrace to which I jumped without any difficulty. From there observe the surroundings of the castle. I discovered an old bridge that was built over the waters of the river, lots of vegetation and tall trees that contrasted with the arid soil on the other side of the river; I also noticed a path that was possibly the way back to town. Now everything seemed so easy because I would only have to descend from the terrace where I was using the bricks as a ladder, then walk on that old bridge to cross the river, then follow the path that could lead me back to the town. 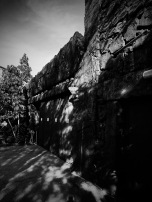 Yes, until then everything seemed so easy. But suddenly to my ears came the terrifying cry of the “la Llorona” who was heard so close to me, the screams continued and remembering the legend I thought that if La Llorona cries were heard close it meant that she was far from me, possibly around the river, so I started to explore the terrace. And I discovered in one corner that the floor was transparent because it was made of glass placed on beams that looked like metal painted in red, forming a kind of container that under my feet was full of golden-colored corn kernels. Its color was so intense that they looked like little grains of gold.

In that corner there was also a tower about three meters high with a window almost at ground level on the terrace. I started to put pressure on the glass with my right foot, to make sure it would not break if I walked on it to get to the window so I could see what was inside the castle. The glass was sturdy, so I had no trouble walking on it and without any difficulty I stuck my head through the window first. 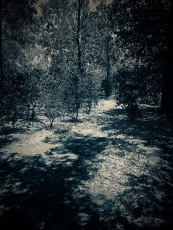 There was a dimly lit room. There were pictures on the walls like the ones they used to put up in churches. An old bed without a mattress on which was a plaster figure broken into pieces but arranged in such a way that only its head was missing. I recognized it immediately because it was the same as the one hanging on the cross in the village church. The dimly light there, was coming from two lit candles. There were also clear glasses filled with water and a large plate with many coins. The space inside the room was very small. At the other end of the window the room had a door that was open. It was easy to discern that room was a kind of chapel or church. 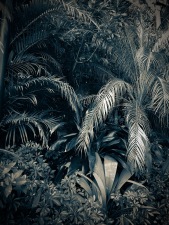 I decided to jump inward falling on the bed; some of the pieces of the plaster figure fell to the floor due to the sudden movement that I caused when falling on the bed. Then I quickly made my way to the door, and as I left that room, I found a hallway covered in dark blue curtains on either side. In front of me was a staircase with many steps that I started to walk down. After about 50 steps down, I reached a very spacious hall with four doors on its right side and an iron railing on its left side. One of those four doors could lead me to the exit, I thought at that moment, just when a terrifying cry from La Llorona penetrated deep into my body until it reached my bones. 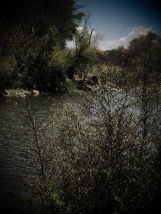 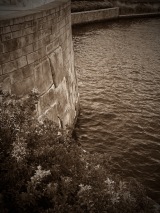 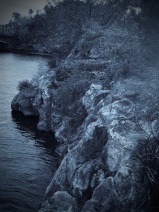