Two shadows were reflected on one of the walls, one was the shadow of Mrs. Lola and the other was the shadow of a fat hen with a long featherless neck. It seemed as if they were facing each other like they were talking. The flames of fire that came out from under the comal lit up the interior of the kitchen causing the shadows on the wall to move in undulating motion due to the heat from the flames.

I wanted to see more, but my height did not allow me to fully see inside the kitchen, so I could only see the shadows reflected on the wall, however, I could clearly hear the voice of Mrs. Lola and Pepe.

“You cannot take the orders because today there is a full moon and the people of this town can see you, you will have to wait until the next trip. “In addition, this week’s orders are worse than usual, one is very small and the other one is very bony”, said Mrs. Lola and Pepe responded with that deep tone of voice that could make the skin of anyone who listens to him crawl, “My brothers and I like the bony ones. We had fun growing them fat while we locked them in the chicken coop.”

“No,” replied Mrs. Lola, “We are going to wait until the next trip for you to take the orders. And I want the hens that you are going to bring me to be very fat so that the guests to get indigestion when they eat them”.

Both of them started laughing hard, but it sounded as if they had something stuck in their

throats that made it difficult for them to breathe, causing them to chock with their laughter as if they were suffocating. The sound it produced felt as a mixture of human laughter with the slow cackling of a hen. Then Mrs. Lola said, “I will accompany you to the patio so you can leave because it is late and you have a long walk ahead of you.”

The shadows on the wall began to disappear and I heard the creaking of the door as it opened. So, I jumped off the log where I was standing and ran to the side of the kitchen and hid myself in the dark. From there I could see how Pepe walked slowly towards the bottom of the patio and then disappeared in the middle of the noise, like the agitated fluttering of a hen. While Doña Lola headed towards the dining room. 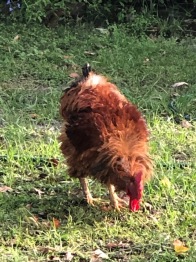 I stayed a while longer hidden in the dark thinking that I had not liked the mysterious way that Mrs. Lola had spoken. Neither did Pepe’s answer. However, the figures reflected on the wall had piqued my curiosity filling me up with lots of questions, “Why couldn’t I see Pepe’s shadow on the wall, if he was talking to Mrs. Lola? Why was there a shadow of a hen reflected on the wall? Why did Mrs. Lola talk about the orders as if they were my little niece and me?” There were many questions running through my mind at the time. So, building up my courage, I walked to where Pepe had disappeared and looking closely at the surroundings of the patio, I discovered a hole in one of the walls of the backyard where I could easily slip away, but not someone like Pepe’s size. 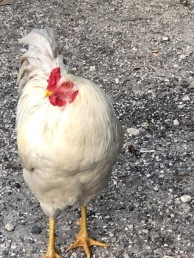 I was still thinking about what I had seen and heard, when my sister started calling out my name as she went looking for me. So, I ran to where she was and then we all went into our room. That night I could not sleep, I had the impression that there were many strange noises coming from all around the house. I was also thinking that day had been Wednesday and if Pepe went to look for the hens every other day, that meant that the next day Pepe would not be around and that Pepe’s next trip back would be on Friday just one day before we were to leave and go back home. 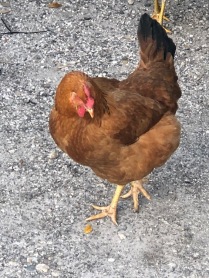 The next day was a normal day, we got up early to accompany my brother-in-law to his workplace. He gave agricultural advice to farm owners who hired him or training agricultural students in different towns, so we traveled a lot. My brother-in-law liked that we would go to visit him every time he left home, so he always took us to meet his coworkers, his students or/and his bosses. For me that day was special because I did not have to hide how hungry I felt, and I ate a lot for breakfast and lunch thinking and hoping that when I returned to Mrs. Lola’s house, I would not have to eat anything.

It was late afternoon when we returned to Mrs. Lola’s house, practically dinner time. My sister did not want me to go to sleep without dinner, so I had to go to the dining room with them. Upon entering the room my eyes lit up with joy because on the table was the same plastic

basket full of bread and the mugs filled with hot chocolate. So, claiming that I was not too hungry I grabbed two loaves and a mug of hot chocolate. After dinner we all retired to our room and that night, I was so tired that I fell fast asleep.

The next day I woke up very early and cold, due to the humidity inside the room. So, I went out to the patio, but the climate outside was hot, so I decided to go back to the room. But I was stopped by the crowing of a rooster and the crowing of hens. Then I looked around and saw several chickens running around the yard and around a fat, long featherless neck rooster. The rooster’s eyes were wide, and the feathers of its body were a mess. Suddenly, I heard Mrs. Lola’s voice, “Hey boy, you woke up early. Those are the hens that Pepe brought yesterday. I had them locked in the chicken coop, but I left them free because today those who bought them are taking them away. But tomorrow I will have more; since Pepe goes out tonight to look for more hens. And Pepe will bring the two hens that your sister will take to cook them at home.” Then Doña Lola began to laugh out loud.

From that moment on, I began to plot a plan to escape and follow Pepe. Then I began to give myself courage thinking that a warrior would not be afraid to go out at night walking in the dark. At breakfast I only had bread and hot chocolate, then I went to the room and stayed there until noon. Fortunately, my sister said that we would go out to eat and then we would go find the town’s park. We stayed in the park all afternoon and returned to Mrs. Lola’s house close to six in the afternoon. When my brother-in-law returned from work, we went to the dining room. I grabbed two loaves of bread and the mug filled with hot chocolate again, after dinner I ran into the room and put a flashlight, matches and half of a candle in my pocket and thinking about the hens I grabbed some corn kernels. That night we all went to bed early because the next day we would return home. I was nervous and stayed awake as I waited for the right moment to escape from the room before Pepe arrived so I could follow him.