(The Girl in My Eyes had four chapters, but because of the length, I decided to make it into six chapters.  Today is not the end of the story.  I hope you enjoy the fourth chapter.) 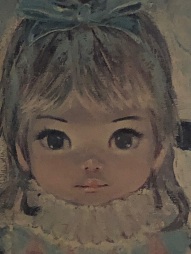 In my dreams it seemed as if I was floating in the dark. Without knowing exactly where I was, I began to move across until I reached an unknown path where my body was part of the wind that moved the leaves of the trees, the sensation was fascinating because I was floating, the floor covered with stones and suddenly she was holding my hand, her black eyes were wide and round, her white skin with tiny mouth with puckered lips, her nose puffed but perfectly aligned with the shape of her face and her hair a mix of brown and blonde.

It seemed to me that she was about six years old, she asked me to extend my hands then she placed hers on mine and just for that moment I could feel a complete desolation that came from her soul, an inexplicable fear that inhabited her spirit and then I saw her fall into a pit. Her face became deformed when it abruptly hit the ground and suddenly her body was covered in blood. I could feel her physical pain and the heartbreak caused by the mistreatment she suffered while she was alive from someone who took her away from the security of her home and separated her from her father. I could see the darkness where she was drowning in sorrow, in the depths of the cold ground. Her pain became my pain and her tears became my tears. My whole being was filled with compassion for that little girl who longed to return home, in need of love, she was in front of me and unintentionally I cried the entire time.

We remained holding hands and I could not understand so much cruelty towards a little angelic face. In the midst of the gloom that surrounded us I heard a familiar voice that said to me at that moment: – Take care of her, she has wandered through darkness for some time and she brought me to you to ask you to receive her because she thinks you are her father and I accepted because I know you will know how to take care of her until the time comes for this little girl to find her father. I looked up to see the person who was talking to me and I discovered that it was my uncle Max, who had been dead for many years, I smiled at him when I saw him and then I woke up.

My heart was agitated, and my emotions compressed in a feeling of love and I understood why she called me “Dad”. Surely after analyzing the relationship between my daughters and I, she

had decided that she could be a part of my life and of my family by replacing the love of her real father (the one she was eagerly seeking) for the security and love I offered to my daughters. I got up from off the floor and I no longer had a fever. I turned on the lights around the house again and returned to my room. That was the first time that I saw her as she had been in life and although I still did not come out of alienation the experienced caused me, I could not control the swirl of emotions that stayed inside me. I doubted my senses still and that did not allow me to fully discern If I was still asleep or I was already awake. What I can describe is that I still felt her pain as if it were my own, so I sat on the edge of the bed right next to her, because there she was waiting for me and without thinking I embraced the cold air 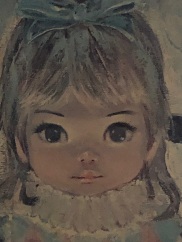 that formed her ethereal body. Without understanding how that was possible, I caressed her deformed face, combed her hair with my fingers, and said “I love you.” I don’t know if it was that demonstration of love that changed her appearance but I began to see her as I had seen her in my dreams, with an angelic face, her puckered lips, inspiring an enigmatic smile and her essence changed and she became the innocent little girl again. Then she jumped off the bed and walked out of my room while I followed her until I saw her disappear through the hallway always into the dark.

The next day I woke up very early and began to fix breakfast, I felt anxious and even though I had slept a short time during the night, I was not sleepy, but my mind was absent, and my thoughts were confused. When the time came, I went and got  my daughters up and asked them to get ready to go to school quicker than usual since I had a meeting with one of their teachers  and  I had to be there at  7:15 am sharp in the classroom, then I had to go to work to not be late. When we were ready to leave, I got in the car and began to drive my car hesitantly because I felt that my body and my spirit were not fully connecting that day. Close to  the

school there is a curve on the road that is very deep and dangerous where everybody always have to be extremely careful when driving all kinds of vehicles on it, I looked on both sides of the road and I saw that it was clear, there was no other vehicle in the opposite direction  wanting to enter into the school so I turned the steering wheel to the right when suddenly something stronger than me turned it to the opposite side and the car stopped abruptly by itself  on the opposite side and I noticed that there was  a car coming  at full speed, if the steering wheel had not been turned the opposite way I would have collided with the other vehicle almost head on. The surprise and the fear that I felt were so strong that my whole body went cold and even more so to my surprise I saw two little hands holding the steering wheel tightly, I shook my head and there she was in between pressing on the brakes and holding the steering wheel and with a sweet smile she said to me: “I Love you dad”. After that experience all my senses began to function as normal as always.

For a while everything was normal inside the house, there were no strange noises, everything stayed in its place, I thought that maybe she just wanted to feel a little love and as she had 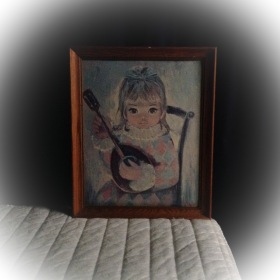 already found it in me, so she had left, but It was not like that. One night while I was sleeping, I heard her calling me: -Dad … dad … I got up and walked directly to the hall where the voice was coming from, she was smiling and pointing to the attic and she said: -I am living up there, but I want to live here with you. Then she simply disappeared. On the next day in the afternoon when it was still daylight, I opened the attic door and a lot of dust fell on me (that was not funny), but I looked around to see if I  could find something and I discovered a painted portrait of the beautiful face of my naughty girl (so I started calling her), I cleaned it and placed it on one of the walls in my room without being aware and without knowing exactly the consequences that action would bring me and I exclaimed: naughty girl, You look beautiful near the fireplace!